Alexandre Achour has created a mechanism from fictional and actual bodies: What do these bodies disclose? Are we all involved in the same plot? We see four people… The performance is a succession of moments in which text encounters and escapes the choreography and the fiction of the story meets the reality of the performance. In these moments tears and knots arise, through which the spectators are invited to take a closer look at how movement is perceived and how choreography generates movement as part of perception. The choreography is informed by stop motion animation techniques – yet here choreographed bodies almost become animated two dimensional images in which the space is opened for the spectators’ imagination through ‘tweening’. Freeze! Nobody move! What is presented could be a crime, a tragedy or even just a lifestyle choice, and the auditorium is where the accomplice, spectator or juror is located. One thing is for sure: this isn’t gonna end… 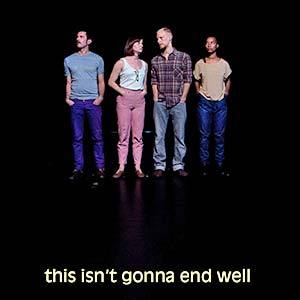