9 May 2020 Europe Day - For an Open Europe of Diversity
12:30 - 13:30 the shiny streaming channel opens again
12:34 Reading the Declaration of the Many - nationwide
From 12:40 choirs sing the Alternative European Anthem of the VIELEN
13:30: Combining the shining actions of both days

Programme: from 7 May, approx.19:00 online: www.dievielen.de/stream

Declaration of the Many

The Many Come Together in Times of Physical Distance
Berlin, May 8, 2020

The Association of THE MANY was founded as an alliance to safeguard artistic freedom in its openness and diversity and has become a interregional coalition between numerous artistic institutions, cultural activists and independent artists within the last three years. In the midst of the preparations for the SHINING DAYS OF ACTION on May 8 and 9, 2020, the movement is now caught up in a global crisis in the form of a deadly health risk for many people worldwide that was as predictable as it was sudden.

We are now forced to face the undeniable distances between our lives and can see like almost never before what is hidden beneath the surface of our global everyday reality. We can see the grave differences between the diverging national decisions regarding life and death. At the same time, we are experiencing the injustices of the global socioeconomic conditions as well as the returning and strengthening of national borders. We are experiencing an (un)safe space of national statehood where travelers are safely transported back to their countries of origin while migrants seeking refuge are left to fend for themselves. We are also experiencing contradictions amongst art activists, between those for whom working independently is an inherent part of artistic freedom and those who work for the cultural landscape and the freedom of art in institutions.

Culture as a relevant societal factor has been placed on an indefinite pause. Without audiences and visitors, art is exiled to the proverbial waiting room. We are rubbing our eyes and asking ourselves: was our sense of artistic freedom real? What do the current circumstances mean for artistic freedom, for the art of the many and every single individual? Is it not a matter of utmost importance to use artistic freedom at this very moment to create space for art and positions outside of the usual institutional frameworks? To network internationally and build solidarity?

The emergency measures taken to slow and contain the pandemic have restricted basic freedoms ranging from the right of assembly to those deeply affecting personal self-determination. In doing so, the governments are assured not only of the support from those in opposing parties, but also, and certainly not without good reason, from broad swathes of the population. At the moment, parliamentarianism is fixated on the acceleration of the necessary coordination of laws to safeguard the economy and public health, as well as to limit the extent of the damages. At the same time, we must not focus only on ourselves and the health of others; we must also ensure that these restrictions do not lead to permanent changes in basic rights and freedoms, not here in Germany and not in any other country either.

It has seldom been so clear that political action is also the power over life and death and, when looking at the external borders of the EU, the migrants seeking refuge who have been placed in camps and those still underway on the Mediterranean, that has been the case since long before the outbreak of the pandemic. Health is, rightly so, incredibly important. THE MANY remain committed to the safety and dignity of every human being, both inside and outside of Europe.

In light of a pandemic, a global climate crisis and worldwide migration, a viewpoint grounded in nation states is no help at all and Europe at the present demonstrates itself as a poor attempt at multinational collaboration. There is no national sovereignty in the global options for action – in these translocal times of international coexistence, we are MANY. More than 10 million people live in Germany who do not have a German passport, many countries have a multinational population and all inhabitants must be able to contribute to decision-making on the regional, national and continental levels! The “right to have rights” must not be tied to the possession of a specific passport; instead, it must be provided to every single human being on the planet in the form of basic rights, such as the right to vote in their place of residence.

Europe was an answer to the First and Second World Wars that were initiated by nationalistic fascists and right-wing extremists, accompanied by prejudices such as antisemitism, racism, xenophobia, homophobia and a variety of discriminations in political and cultural life. The Second World War ended in Central Europe on May 8, 1945 with liberation and the defeat of the national socialist German state. Five years later, on May 9, 1950, the European Union was founded with the Schuman Declaration.

These are two important dates for remembering the resistance, the liberation made possible by the solidarity of the Allied Powers and the attempt to see that understanding countries in terms of nation states is not the only form of political negotiation. Today, the Secretary General of the United Nations, António Guterres, has called for world peace in light of the danger posed by the pandemic in a remarkable way. It is time for a UNITED EARTH, world peace and new negotiation processes that are marked not only by the logic of economics, but instead by notions such as taking the well-being of everyone into account and that are based on equality. THE MANY are committed to ensuring that everything does not return to the way it was before once this global crisis is over! It is time to start with ourselves: in our region, our country, our continent and, at the same time, we must ensure that we do not remain fixated on these places and countries, but, instead, that we keep everyone in mind. THE MANY are searching for new paths for this kind of international society, starting with ourselves, with art and culture and moving toward global networking.

The vast differences in socioeconomic fairness between countries, people as well as those of us working in culture have been rendered starkly visible: the freedom of different formats, the freedom to experiment and to fail is frequently built upon the foundation of precarious living situations. When we look at the open questions concerning regional production, the supply of food and the accessibility of desparately needed health care, we see that a focus on economic advantages means very little. The question of the diversity of the population and their representation in the arts and cultural landscape has not been answered in any way, shape or form. These are two specific fields in which those active in the arts can demonstrate how they are working as a research laboratory for the future democratic and open society we all need and how this can proceed in collaboration with many institutions and art and culture locations on the path of art to create a space that will change the world.

On May 8 2020, beginning at 6:00 pm until midnight, in occasion of the 75th anniversary of the liberation of Europe and the defeat of the national socialist German state, and on May 9 at 12:30 until 13:30 pm, in honor of the 70th anniversary of the European Union, THE MANY are creating a space where it is possible to come together while remaining physically distant. Events will take place in urban spaces, cultural locations and on the internet in more than 32 different cities. Hundreds of people will sing an alternative European Anthem of THE MANY on live streams and on their balconies: we demand that no one be left behind - not at the borders, not in the crisis of this pandemic and not in their homes!

The next Days of Shining Action will take place on November 9, 2020 and then, a year later, we will again take to the streets on May 8 and 9, 2021 to joyously celebrate Victory in Europe Day and dedicate ourselves to an open EUROPE OF THE MANY.

WE ARE MANY, EVERY SINGLE ONE OF US! 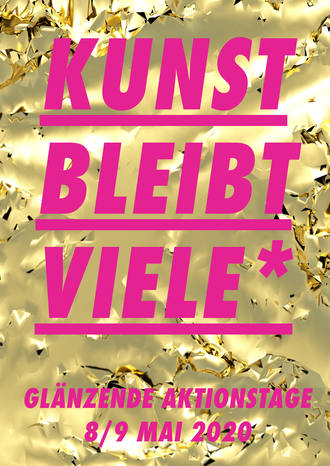